Personally, 2014 might have been one of the worst years of my life. However, it was also filled with some of my best memories of the last six years, and I’ve made new friends, and strengthened friendships outside of just Twitter and Cinefessions. It’s also been a mixed year for cinema. My biggest hopes were destroyed (Godzilla, 22 Jump Street), while some films met my expectations (X-Men: Days of Future Past) or surpassed them by a great deal (Captain America: The Winter Soldier). None of those films topped my list this year, and instead I come off as a complete film snob with the ones that did. But, guess what? These ten films were bloody fantastic, and the best of what I saw released this year (I’ve yet to see a small handful of the “Oscar Bait” films). 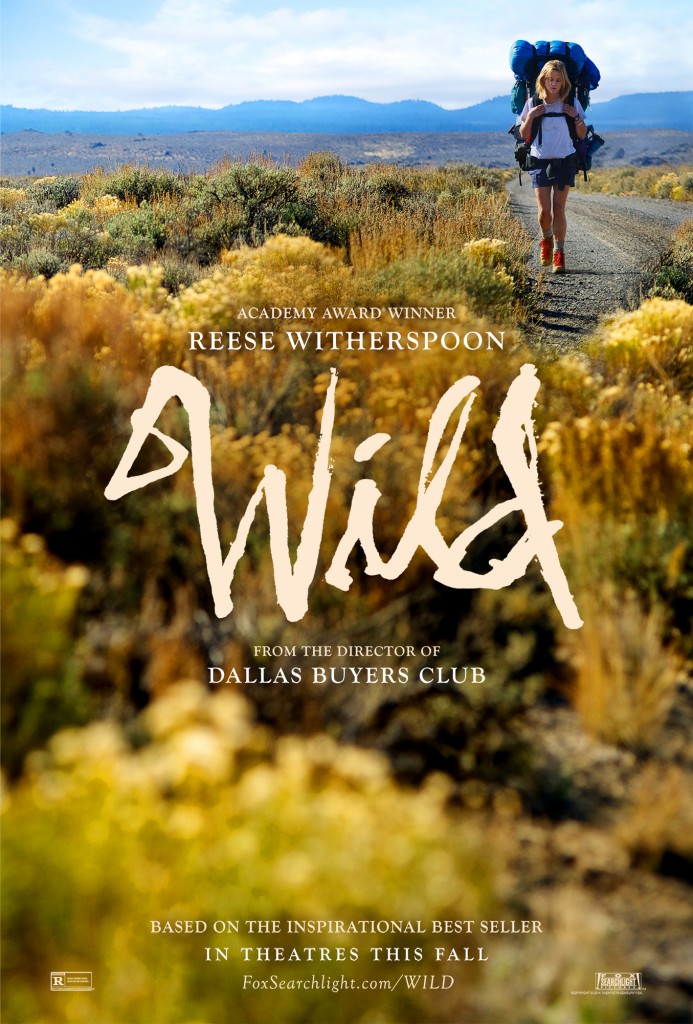 10. Wild (dir. Jean-Marc Vallée)
I didn’t know what to expect when I went into Wild. I knew it was based off of a book, and the general buzz was that it was good, but very Hollywood-ized. I haven’t read the novel so I can’t give you an opinion on that aspect of it, but I can tell you that this film just barely squeezed onto this list, and I was honestly torn if it was even good enough at all.

So why is Wild at number 10? Cinematography and a compelling story about finding yourself and going against the odds one sets for themselves. There’s a great scene at about the 90-minute mark that made me tear up. It’s a flashback to her mother singing and being happy in the kitchen. She asks her why she is so happy when they have no money, are barely making it, and so on. Her answer was perfect and heart wrenching. That emotional impact is what sealed this film at my number ten spot.

9. The Grand Budapest Hotel (dir. Wes Anderson)
Wes Anderson is a love/hate director for me. I won’t waste much time here, but if you want to read my full thoughts, you can do that right here.

Grand Budapest Hotel captures the humor and zaniness I expect from the director, but the charming characters and fun little script really stole my heart. This is easily the best “comedy” of 2014.

8. Begin Again (dir. John Carney)
I adore the film Once, so my expectations for Begin Again were sky high. It’s not as good, or even the same type of film really, but there is so much to love about this film. I love the characters, and the songs. Yes, the plot can be described as predictable, but the heart is what makes it all worthwhile. There are a few “classic” moments here, and that’s why Begin Again sits at number 8. My full review can be found here. 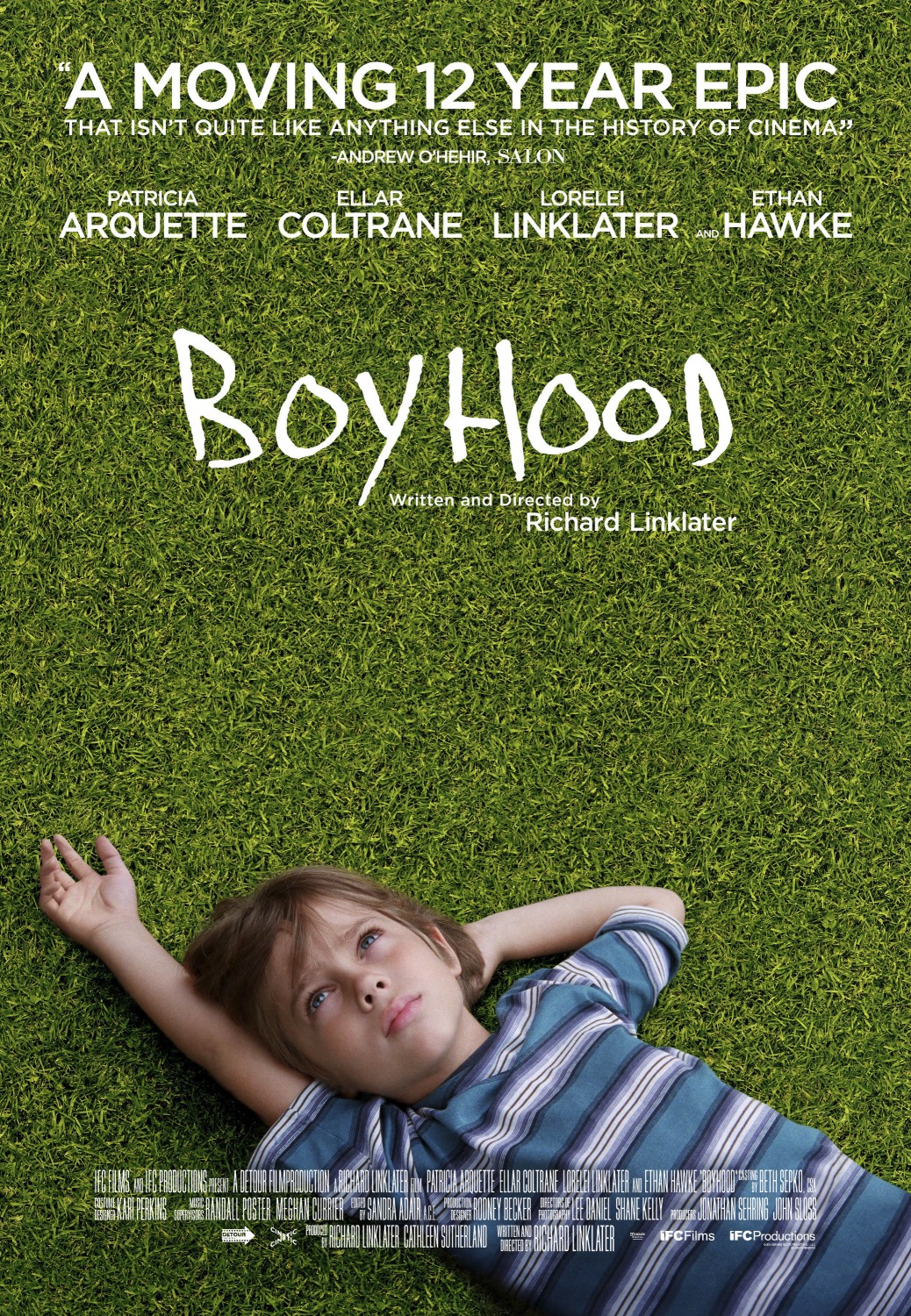 7. Boyhood (dir. Richard Linklater)
The Before series is one of my all time favorite series out there, so I knew I had to see Boyhood. While I don’t think this is as good as those films, what Linklater does here is astounding. The dedication, not just from him, but also his cast and crew, and the time and energy put into this project should be enough to just hand him an Oscar. Filming the same cast over such a long period of time, just to capture them aging and growing up, is a true cinematic achievement, and while the three-hour runtime might be daunting, it seriously flies by and has stuck with me these last six months. Here is my full review.

6. Edge of Tomorrow (dir. Doug Liman)
Who purposely wants to see a Tom Cruise movie these days? I don’t, and yet there I was in Detroit, visiting Branden and his fiancée (now wife), and seeing this in IMAX 3D. This was an insane ride. It’s both hysterical and action-packed. As soon as a gag or scene gets old, we move on. The film’s only flaw is the final 90 seconds, and we can thank Tom Cruise for this change from the original source material (it literally makes zero sense). How am I putting this above Boyhood? This mixed two genres, had a unique idea, and actually turned out fantastic. The surprise of it all is why it squeaks ahead of Boyhood.

5. Nightcrawler (dir. Dan Gilroy)
“I really want to see Nightcrawler“, Branden texts me one night. I had no idea what he was talking about. Then I saw the trailer, and while I’m not a huge Jake Gyllenhaal fan, he is freaking brilliant here. Both strong and creepy, he captures the sleaze of a news hound. This was a surprisingly fantastic film that I didn’t think I’d love as much as I did. The best part is that it told a story I hadn’t even given any thought to. Nightcrawler is a morbid version of the paparazzi, and I kind of liked it.

4. Locke (dir. Steven Knight)
I love me some Tom Hardy. All naked and… Oh wait, wrong movie. Locke tells the story of a man driving a car. That’s it. That’s the entire film: a man driving somewhere to do something, and he takes a lot of phone calls. The interesting thing here is that I was completely captivated as we get to know this man, his life, and his story, what he does for a living, his family, and everything in between. We are in this confined space with him and it’s almost as if you’re bonding, and creating some weird, one-sided stalker-like friendship. In a year of interesting ideas and themes, this is one that really hit a lot of strong notes for me and offers some great quotes, which I even copied down for a review I never got around to writing.

3. Birdman (dir. Alejandro González Iñárritu)
Michael Keaton in whitey tighties. That is the sole reason I wanted to see this film. Seriously, that scene is so hot to me! But that isn’t why Birdman is on this list, let alone in my top 3 spot. This film captures the essence of a Broadway play. Many moments that feel like they’re filmed in one long take, a great cast, and a fantastic, almost snarky script. The film is so meta that it makes your brain bleed from thinking how awesome it is. If you’ve been to a lot of Broadway shows, or done a lot of stage work, I can’t help but feel Birdman will sit well with you. Here’s my full review.

2. Under the Skin (dir. Jonathan Glazer)
I wanted to see this because the plot description of an alien hooker roaming Scotland sounded amazing. I haven’t read the book so I can’t make a comparison on it, but this was a fantastic theatrical experience for me. The film is haunting and jarring. There is very little dialogue, and yet you feel connected to this mysterious entity. The film’s final moments are still sitting with me. It also has ScarJo naked, and lots of full frontal male nudity as well. It’s like the best of both worlds! My full review can be found here.

1. Gabriel (dir. Lou Howe)
I’m not sure if it’s fair for me to place Gabriel as my number one film since it hasn’t been shown outside of the film festival circuit, but guess what? I don’t care because this was the defining moment of this year’s TriBeCa Film Festival. Gabriel is a haunting story, superbly acted, and it hits the feels so hard that I was left unhinged by the film’s final moments. I knew very little about it going in, and it was like a mental sucker punch. Getting to listen to the director’s Q&A afterwards shed a lot of light on things, and how personal of a film it is. It’s a travesty that Gabriel hasn’t gotten picked up yet, and that Rory Caulkin isn’t getting an Oscar nomination for the second best male performance I’ve seen all year (Eddie Redmayne gives a heartbreaking performance in The Theory of Everything, and having lost someone to ALS, the time he sunk into perfecting not only the actions, but the emotions involved with the disease, means he deserves that award in my eyes). Here are my full thoughts on Gabriel.

There you have it. The ten best films I saw that were released in 2014. I haven’t seen a few films still (Top 5, and Unbroken, just to name a couple) but I doubt they can dethrone any of these from this list.