A Cinefessions Poll – Which Scandinavian Horror Film Should We Review?

rtunately for everyone involved, the Christmas Wishes Arc is now behind us, and with the new year comes a fantastic new arc: the Scandinavian Horror Arc! We have five exciting films lined up for review in our new arc, which kicks off January 5th, 2018, but we need your help to decide our sixth and final film of this upcoming arc.

If you haven’t listened to the last few episodes of the podcast, let us update you on what the arc currently looks like.

We have whittled down the options for the sixth film to four great movies that would be equally fun to talk about. Unfortunately, we don’t want this arc to take any longer than the six episodes, so we have to narrow it down even further, and that’s where you come in! You can choose between (in alphabetical order):

“The gruesome Nazi Zombies are back to finish their mission, but our hero is not willing to die. He is gathering his own army to give them a final fight.”

“Set in 1982 in the suburb of Blackeberg, Stockholm, twelve-year-old Oskar is a lonely outsider, bullied at school by his classmates; at home, Oskar dreams of revenge against a trio of bullies. He befriends his twelve-year-old, next-door neighbor Eli, who only appears at night in the snow-covered playground outside their building.”

“Norwegian folklore turns out to be real when Leo and Elvis encounter a girl called Thale in a basement. A regular cleaning job turns into a struggle for survival, while they’re trying to figure out what or who Thale is. Could Thale be a huldra?” 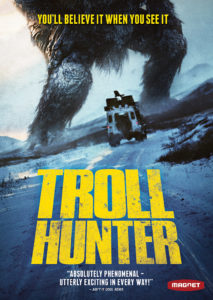 “A group of students investigates a series of mysterious bear killings, but learns that there are much more dangerous things going on. They start to follow a mysterious hunter, learning that he is actually a troll hunter.”

So take a second and give the poll a vote to help us decide which film we’ll review for that sixth and final week of the Scandinavian Horror Arc!

This poll is no longer accepting votes

If you have another extra second, we also ask that you help us decide how to grow in 2018 by answering this second poll as well!

Thank you guy so much for helping shape The Cinefessions Podcast into something that you’re excited to tune into each and every week. We wish everyone reading a very happy holidays, and a wonderful, healthy new year in 2018!