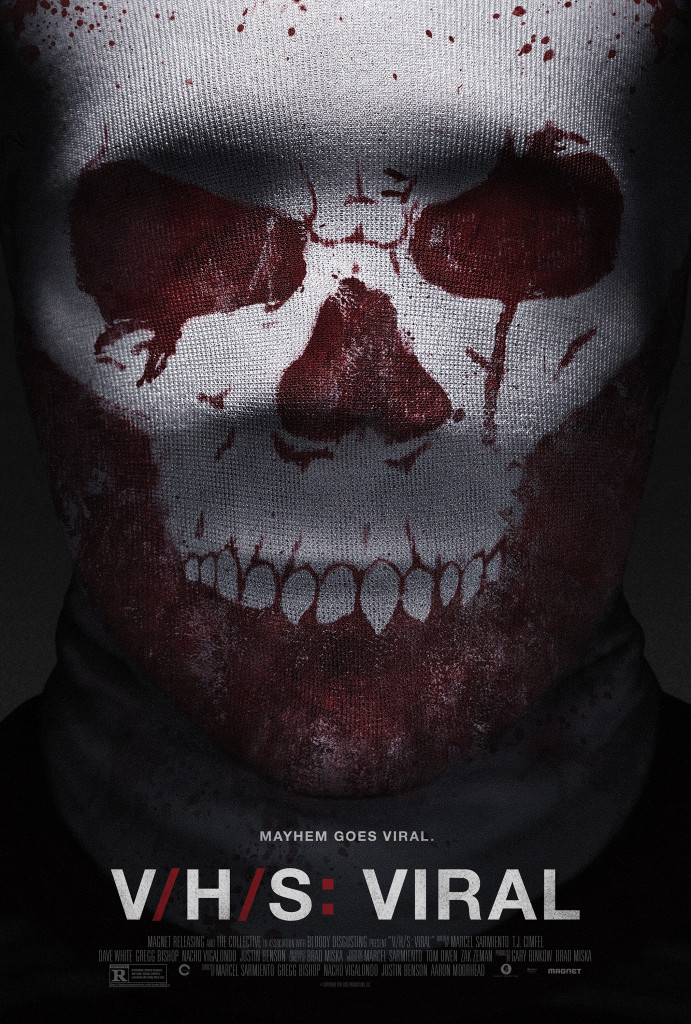 If there’s one subgenre in horror that I really don’t care for, it’s the found footage style, which our very own Branden adores for some reason. While I don’t care for it, that doesn’t mean I can’t appreciate when one is done really well (Frankenstein’s Army, Cloverfield). I’ve actually seen the first two films in this series, and while they had a connection to each other, and I enjoyed them for what they were, I had mixed curiosity about this third entry, V/H/S: Viral.

Following the structure of the first two films, Viral gives us an overlaying short film that is spread out the roughly 90-minute runtime. There are three short stories that take place in the middle. The easiest way to review this is do it story by story then give you an overview of the film as a whole.

The films “main” plot follows a guy who wants to be the next YouTube sensation. He hears about an ice cream truck that has been stolen, and is leading the police on a chase in his neighborhood. He runs out to film it, and eventually starts chasing it. Meanwhile, his girlfriend runs out and vanishes after the ice cream truck drives by. Basically this ice cream truck has a bunch of tapes inside that are playing the three short films that we get to see. In all honesty, this wrap around plot makes zero sense, and I couldn’t follow what the hell was going on with it. It jumps all over the place, and is just a mess. It’s easily the weakest of any of the shorts between the three films.

Our first coherent short is Dante the Great, which is half found footage, and half regular footage, which is just weird. I’m not sure why they went the route of mixing it up like that because it doesn’t follow the “rules” of the series at all. Basically, Dante finds a magician’s cape that he believes was Houdini’s. However, this cape gives him amazing supernatural powers, and he blows away the world of magic. He is able to teleport people across the globe without seeing them, and more.

As somebody somewhere once said, though “with great power comes great responsibility”, and this cape has a secret. It feeds on humans, and it requires a sacrifice, usually the magician’s assistants. What follows is a fun little CGI romp, and while the CGI isn’t good by any means, it gets the job done, and it’s a fun little ride. The cast is fairly strong in their roles, but no one really stands out.

Next up we have Parallel Monsters, which is a Spanish film about a scientist who builds a portal to another dimension. When the machine starts up, he sees a carbon copy of himself on the other side, and they agree to swap places for fifteen minutes. He warns the copy not to wake his wife, and hops on through. In this new world he meets his double’s wife, who seems to be putting together an orgy, but things are never as they appear. If I told you the twist, you wouldn’t believe me. Or, if you did, it would ruin it, so let me just say that Parallel Monsters both shocked and thrilled me with its twisted little twist. This was easily the strongest short in V/H/S: Viral, and everything flows perfectly thanks to solid performances and good direction.

Our third and final short is Bonestorm, which follows three skater kids and a cameraman to Tijuana to skate in this awesome abandoned pool. Along the way they notice a creepy lady, but go about their skating. What ensues can pretty much be summed up as a great homage to Army of Darkness. The camp level in this short is insanely high, and the special effects are solid and just plain silly. Not as serious or surprising as Parallel Monsters, Bonestorn is still definitely a solid short. The only problem I can find is in the acting, which is rough. Also, the characters are not exactly likeable, but that all just adds to the charm of Bonestorm.

It should also be noted that, oddly enough, V/H/S: Viral is missing the fourth short, Gorgeous Vortex, which was filmed, but not included in the release. This just seems strange to me.

V/H/S: Viral is the weakest of the V/H/S trilogy. That said, as I type up this review, I realize that I actually enjoyed the three included shorts, and it is the wraparound plot that is the problem. While two of the shorts have some flaws, they are still entertaining, and that’s why I watch these films. If you’re already a fan of this film series then, by all means, give it a rental. Otherwise, you can just wait for it to hit Netflix in a month or so.