A Lifetime of Film covers one specific year of a Cinefessions’ writers existence, from birth to now, and goes over their top ten films from that year. It stems from a meme on Letterboxd, and is simply being expanded upon here. This week, Ashe covers 1994.

It was back in 1994 when I left New York and everything I knew to move out to the middle of nowhere in Northwest Ohio. I was 17, had my own car, and was mistaken for a gang member when I first moved out to Ohio because of the rust holes in my car that looked like bullet holes. I cut my initial list of 77 watched films down to 35, and then had to narrow it down to ten from there. This was actually fairly easy to cut to ten as I’ve been rating the films and sorting them. This does leave out a few films I did love from the list, though. Honorable mentions include The Mask, Leon: The Professional, Dumb and Dumber, Ace Ventura: Pet Detective, Speed,Wes Craven’s New Nightmare, Quiz Show, The Ref, and Street Fighter II: The Animated Movie. Street Fighter II is actually an anime that really only has the “II” added to put it within the context of the game setting. It is fantastically animated, but has an extremely slow story, even with some of the great fights. The Ref, while it’s one of my Christmas film staples, just didn’t quite make it against some excellent competition. I still love Wes Craven’s New Nightmare, but on a recent viewing I realized that Wes’ last outing with Freddy didn’t hold up as well as I remembered. So what are my top ten?

10. In the Mouth of Madness (dir. John Carpenter)
Not the usual Carpenter style, but at the same time, oozing with it, In the Mouth of Madness pays homage to the Cthulhu mythos and several of H.P. Lovecraft’s stories, along with a few of Stephen King’s. Sam Neil plays the insurance investigator thrown into madness amazingly well. With a limited budget – usual for Carpenter – he uses the less is more approach to filmmaking, giving us hints of some of the things creeping in the darkness. The end result is a great horror film and probably one of the better Lovecraft-themed films out there.

9. True Lies (dir. James Cameron)
While this isn’t purely a Cameron film, as it was based on another film with the same premise, Cameron does take it and make it his own, much like Carpenter with In the Mouth of Madness. The spy hiding it all from his wife is played off beautifully, and although this is a balls to the wall action flick, there’s some great personal drama and lots of comedy. All of the comedy is incredibly well-timed, making this an all-around fun flick that pretty much everyone can enjoy, even if they’re not into spy films.

8. Clerks (dir. Kevin Smith)
I didn’t actually get to see this one until I was in college. Mallrats was my first Kevin Smith film and is definitely my favorite, but this one ranks up there. All the hallmarks that establish a great Kevin Smith film are here, and with an insanely small budget, he delivers a film that still stands up today. Sure, the sequel had theDonkey Show, but without this one, we wouldn’t have the sequel at all, or the great lines that come out of the anguish of having to work retail.

7. Forrest Gump (dir. Robert Zemeckis)
This is one of those films that resonated with me on a bunch of different levels. Tom Hanks does an amazing job in the film, but I really love Gary Sinise as well. The effects work is great, it has some great moments through the turmoil of the second half of the 20th century, and it works on a lot of levels, so pretty much anyone can sit and watch this and walk away from it feeling something. I do occasionally love a feel good film in the midst of all my sci-fi and horror flicks, and although I haven’t seen this one in a long time, just thinking back on it has me wishing I still had a copy to pop in.

6. Interview With The Vampire (dir. Neil Jordan)
I remember going to see this alone at the local theater in town when it came out, then turned around the next day to go see it again. The choice of cast works amazingly well. Cruise and Pitt are great as Lestat and Louis, but the one who steals the film is most definitely the young Kirsten Dunst. This is pretty faithful to the book, as I remember it, with only a few changes. The score and cinematography are both fantastic. While Coppala’s Dracula might be my favorite Dracula tale, this is one of my favorite vampire tales if only because it touches on so many of the themes I like when dealing with anything that can live for centuries.

5. Stargate (dir. Roland Emmerich)
Before Independence Day and Godzilla, Devlin and Emmerich worked on a film starring Kurt Russell and James Spader about ancient Egyptian gods who could travel through space using a gate system. It spawned three TV series, several direct-to-video films, and the film is still the thing that defined what the series would become. The design work, the build-up of what could have been the ancient Egyptian dialect, some great effects work, and the haunting performance from Russell to go along with Spader’s naive and aloof scientist, are a perfect pairing for the film. This is still a bit on the formulaic end of things, but it has a few surprises here and there.

4. The Lion King (dir. Roger Allers, Rob Minkoff)
This was probably the last film I saw at the local drive-in in New York before I moved out to Ohio. The songs are great, the story is decent, although heavily borrowed from Hamlet, the dialogue is always fun, and the voice actors bring to life a group of characters that could fit in pretty much any setting. This one just happens to be in Africa, and with the animal kingdom. The Little Mermaid started the revival of Disney animation, and it rumbles on with this film, which has really stood the test of time. That’s a bit of the beauty of hand-drawn animation over the computer driven work. While both tell a story, the computer driven film is only as good as the artists and computers putting it all together, while hand-drawn just has this warm feel that you can’t quite replicate there.

3. The Crow (dir. Alex Proyas)
This ranks so highly partly because of Brandon Lee, and partly because I fell in love with this film during a bit of personal turmoil, but also because it’s such a well done film, even if they veered off and did their own thing beyond the graphic novel. They cast it really well, have some great visuals and effects along with some amazing model work for the city, and it flows well, from the revelation of what happened the year before, to what’s going on now. Along with that, we have a really well chosen selection of songs to go with the haunting score to drive the action and plot forward. This one will always hold a special place for me. 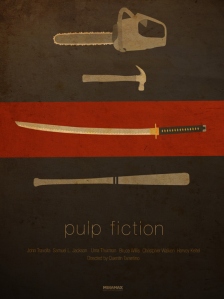 2. Pulp Fiction (dir. Quentin Tarantino)
This film pretty much defined my film experience through college, along with Reservoir Dogs and Army of Darkness. It was almost guaranteed that someone I knew had one of these three films playing at some point during the week in their dorm room. This was my first experience with Tarantino, and while I love Reservoir Dogs, this is the one that got me into his work. Travolta, Jackson, Thurman, hell, even Willis do a fantastic job with the fast-paced dialogue he writes, although I think he may have slowed it a bit for some like he did with the ranger in From Dusk ‘Til Dawn. The pacing, the story, the out of order pulp novel feel to it, and the throwback look all sucked me in, and coupled with his knack for picking music that fits the feel of his film, it’s just solid over all.

1. The Shawshank Redemption (dir. Frank Darabont)
Frank Darabont has a thing for adapting Stephen King to the screen, and he does it really well. While this isn’t a horror piece, it’s definitely got King’s pacing to it and is still one of my favorites out of Different Seasons. Morgan Freeman is excellent as the storyteller of the film, and his character arc plays out great in the film. I think them changing up some of the sequences from the book help the pacing of the film as well, and they get great performances out of everyone all around, but the villains of the film definitely nail it. There’s this great sense of triumph and friendship from it all that raises the whole experience of the film, and I love it.

Photo Source: Russell Dickerson (In the Mouth of Madness poster)