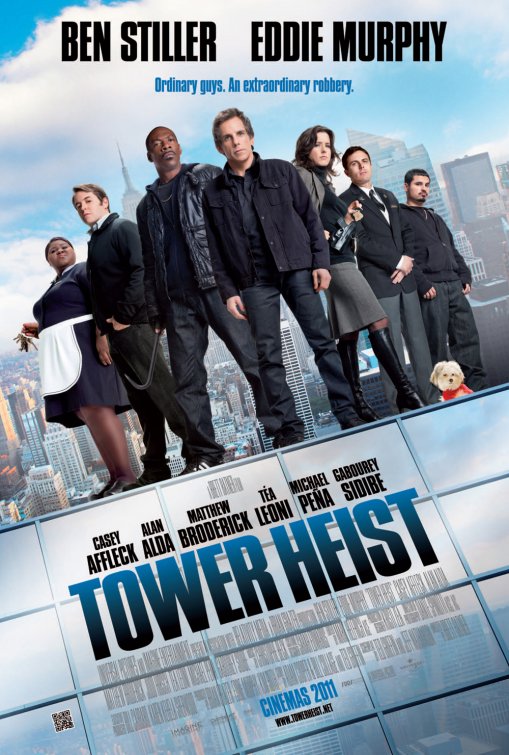 Acting
There are no weak links in Tower Heist, but Ben Stiller, Eddie Murphy, and Gabourey Sidibe are the stand outs. The whole cast is quite funny, and the characters are really likable.

Story & Script
A rich man “invests” the pensions of the entire staff of The Tower where he lives. Unfortunately for them, this rich man is really a dirty dealer, and all of their money is lost. Ben Stiller plays the manager of The Tower, a ritzy Manhattan residence. He vows to get their money back, and the only way he can do that is by robbing the man of the millions they’re certain he has in his home. The story works surprisingly well, and delivers in both catharsis and laughs. The last act gets a bit ridiculous, but I was invested enough in the characters at that point that it didn’t really matter. I just wanted to see the bad guy get it.

Direction
Brett Ratner has an extensive and eclectic filmography, but I’ve generally liked his work over the years. Tower Heist is another in his line of successful work. There’s nothing special about the editing or cinematography, aside from how well he able to use heights to create some truly tense moments, but Ratner does what he needs to tell this story clearly and humorously, which is good enough for me.

Intangibles
There are a couple moments of tension that fit really well in this heist film. One is toward at beginning, and acts as the motivation for this entire crime, and the second is during the finale when the crime is happening. These are small but unexpected moments that helped drive the film home for me.

Rewatchability
There is enough comedy in this that I would enjoy watching it again. I’m not sure how many times I could watch it before it got stale, but I’m sure I’d enjoy it a second time at least.

The Verdict
Tower Heist is an enjoyable heist film, but the target audience is a bit unclear, which ultimately hurt the film. There are moments where the movie feels like a family film, but then there are times where the sexual references and language destroy that image. Still, I laughed quite a bit during Tower Heist. The characters drive this story, and you really want to see the bad guy get what’s coming to him.