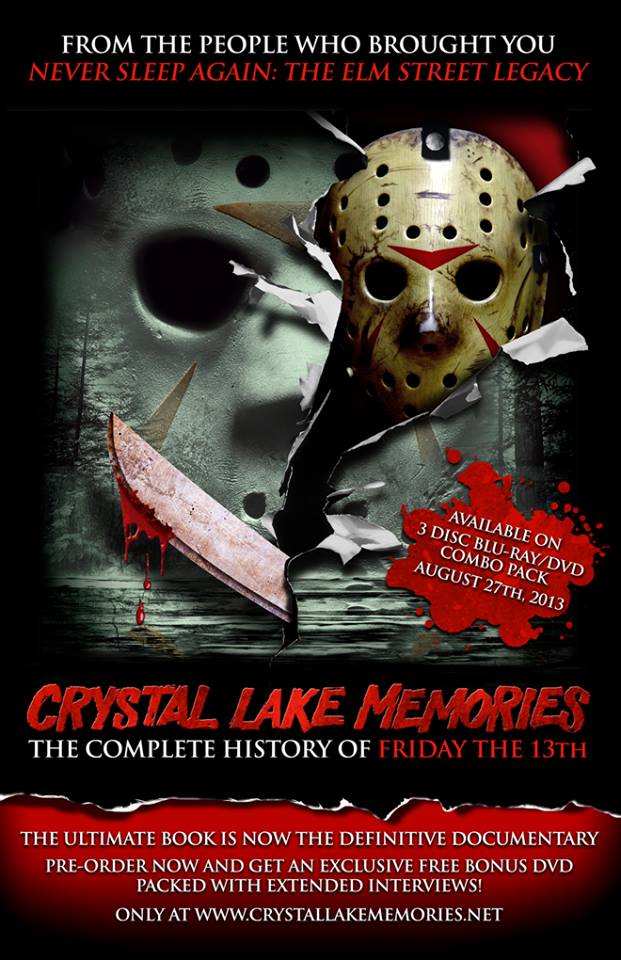 Chris actually picked Crystal Lake Memories for me to stonewall my efforts in this past year’s Cinefessions Summer Screams Challenge. The idea was that I would spend over six hours of time earning one measly point.  I knew immediately what Crystal Lake Memories was going in considering the title, and that fact that our boy with the hockey mask is splattered all over the DVDs. I don’t mind documentaries, but this is a long film series. From the original Friday the 13th, all the way through to the reboot film from Platinum Dunes in 2009, this documentary covers it all.  It is hosted by Corey Feldman, and has interviews with just about everyone involved with the production series, excluding a small handful that have either passed away, or were just too busy. You get an in-depth look at the films that launched a major franchise and spawned another round of copycat films. Slashers are cheap to make and rake in the dough, though, so it’s no surprise to see how long this series has lasted.

Crystal Lake Memories goes into just about every aspect of the Friday the 13th film franchise, from the initial production, to reasons behind casting, budgets, and, of course, public response. This is about as in-depth and “from the horses mouth” as you can get, aside from the book of the same name. The interviews with cast members are pretty good, with only a small handful of people not making an appearance. I was only really interested in the making of the films that I really loved from the series (the first four films, the first Hodder feature, the reboot, and the grudge match versus my real favorite slasher, Freddy Krueger), but it was neat getting into the backgrounds of the others and seeing why some of the films in the series just didn’t work, and why.

This follows a pretty standard documentary format, taking you from beginning to end for each of the films. The interviews themselves are cut fairly well, and the scenes and outtakes chosen from each film are decent. The studio destroyed some of the unused footage, though, so all that’s left in some cases are the workprints that look pretty terrible. Still, it’s neat to see this otherwise lost footage. I did like seeing more of the thought process that goes into these films, and found it interesting that one of the staples they wanted to keep for the films was that the bulk of characters we see on screen would be likeable, or at the very least, relatable, which is something that we don’t see in a lot of horror films these days.

They do end up spending time on the TV series, which I knew was spawned from the same producers, but it still surprised me when it popped up on my screen. It’s not given nearly as much time as the films as they kind of skim over it. Some other events of note are that Freddy vs. Jason had been in talks as far back as the ‘80s, and that Friday the 13th Part VII: The New Blood was, in part, inspired by that attempted collaboration to give Jason a really tough opponent. The other thing that never registered with me was that each of the films actually has a really strong female lead. You always think about the “Last Girl”, but most of the women throughout all the films are strong and diverse characters, which isn’t something you normally see, but probably should. It works well for the Friday the 13th films.

My other big takeaway from the documentary was the rights reacquisition from Paramount by the original producer who then took Jason to New Line, which gave us Jason Goes to Hell and Jason X, neither of which were particularly good. After those two, though, this reacquisition also gave us Freddy vs. Jason, and eventually the reboot film, which has the Platinum Dunes signature on it more than anything else.

My one complaint is that Crystal Lake Memories is incredibly long. I did like the time spent on each film, and that it was fairly in-depth, but seven hours is a really long time to spend watching behind the scenes work, even when you can split it up pretty well by two discs. I didn’t really hit that point with Never Sleep Again which covered the Nightmare on Elm Street films, but that was 2 hours shorter, and didn’t have as much ground to cover as Freddy wasn’t as prolific at the box office as Jason. I’m not sure if it was because I was not that interested in the films they were covering, or just the runtime overall that wore me down, but I really felt the length. Overall Crystal Lake Memories is a solid documentary on one of the biggest slasher film series that came out of the late ‘70s and early ‘80s, but it is a bit too long for the average viewer.