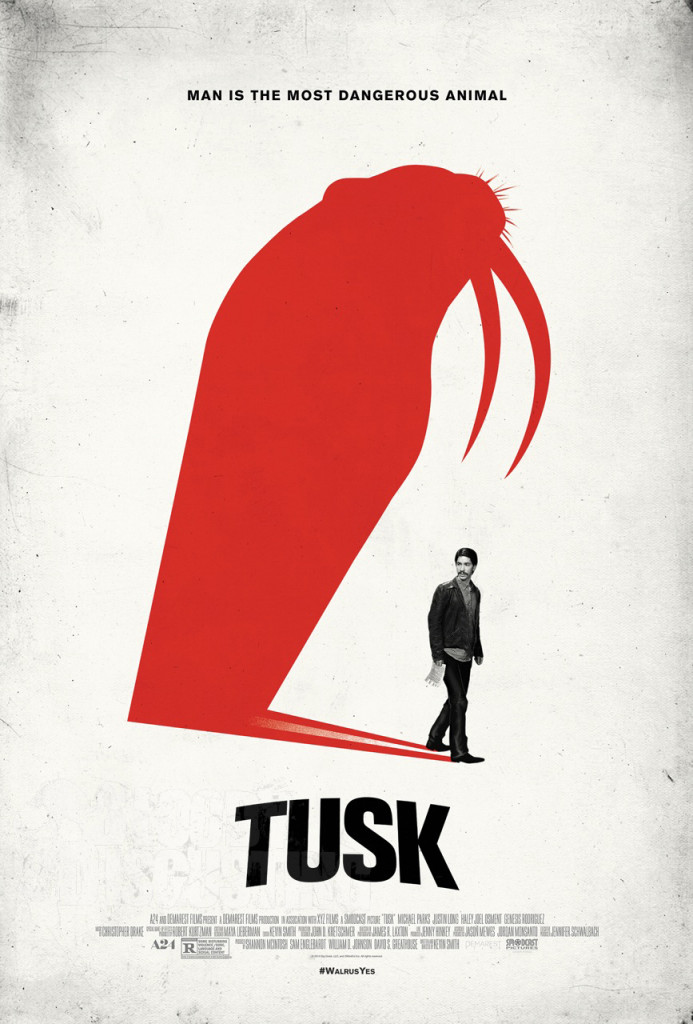 With Red State, Kevin Smith decided to do things his own way, and try something different and completely out of his realm. He missed a few marks there, and it wasn’t a good film by any means, but it takes gusto for a director of comedies to step out of his comfort zone. So when word came out that he was going to do a full-blown horror film next, I was stoked. Tusk had great buzz from preview screenings, and I was stoked. Hell, even the trailer looked creepy and crazy.

If I tried to label Tusk I would be falling victim to Smith’s obvious joke. The outer shell for Tusk is a horror film through and through. Wallace is the host of “The Not-See Party”, a podcast covering all things crazy on the internet. His best friend, Teddy (played by a moderately chubby Haley Joel Osment), co-hosts with him and they decide Wallace should go to Canada to interview a kid who accidently chopped his leg off while doing a Kill Bill routine. Things don’t go as planned and Wallace finds an ad in a bathroom. He ends up meeting Howard Howe, who has a story to tell him. Too bad Howard wants to turn him into a walrus, the same creature that saved his life years ago.

Michael Parks plays Howard, and he gives a completely crazy, amazing performance. His narrator voice as he tells the story is captivating, and when things get crazy, he really rolls with the punches. However, no matter how great he is, Johnny Depp shows up and destroys the film. I don’t know what kind of direction Smith gave him for the character, or if he pulled a Bruce Willis and was just going to do it anyway he saw fit, but my god does he ruin the film. I really don’t know what’s worse: his accent, or just the bad acting all around. I’ve never viewed a film where a single actor’s abilities have ripped me right out of the film quite like Depp does in Tusk.

The other problem I have is that the roles of Teddy and Ally aren’t needed at all. Their quest to find Wallace feels more like filler than an actual, important plot point. They are never in danger; they are just following vague clues leading to the answers we, the audience, already know, so it’s like watching one side of a mystery, but with the plot already explained to you in graphic detail.

It’s a shame, too, because Tusk has a great vibe going on. Sure, some things are predictable and the ending is complete garbage, but every scene between Justin Long and Michael Parks is fantastic and crazy, from the acting to the gore. Part of me wants to praise Smith for really breaking out of his mold with Tusk, which is based off of something he said on his own podcast. Sadly, it just falls apart into a big, sloppy mess around the midway point, and it never recovers. As a short film this would have been fantastic, but as it stands, Tusk is utterly underwhelming, and pretty much unbearable to watch once Johnny Depp comes on screen.